David McMillan has always had a strong connection to UMD and is thrilled to have the opportunity to assume the role of interim chancellor. “When I first ventured onto this campus as an incoming student in 1979, I could not possibly have imagined how consequential the next four years of my life would be and where my UMD experience would lead me in life,” he said. 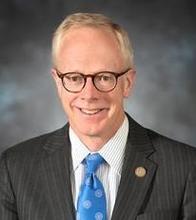 He came to UMD from the Twin City suburbs to study economics and history. In his senior year, he joined the Bureau of Business and Economic Research (BBER) as a student researcher. After graduating, he was offered a one-year term faculty appointment as research fellow. “Since I finished my time with BBER back in 1984 and headed to the Twin Cities to pursue my law degree, I have never drifted far from UMD, Duluth, and Northeast Minnesota.”

After law school in Minneapolis, McMillan worked as a corporate attorney for Union Pacific in Omaha before returning “home” in 1989 to join the legal team at Minnesota Power. In 1998, he began his career as an executive of Minnesota Power and its parent company, Allete, Inc. In 2011, he was elected to the University of Minnesota Board of Regents. Over the course of his career, he has served the community, the region, the state, the nation, and the University of Minnesota System.

McMillan currently serves as chair of the Great Lakes Seaway Advisory Board and previously served as the board chair of the Minnesota Chamber of Commerce, UMD's Natural Resources Research Institute, the Area Partnership for Economic Expansion, and Goodwill Industrial Vocational Enterprises. He is also a past University of Minnesota Foundation trustee, member of the Duluth Entertainment Convention Center's Board of Directors and the Board of Directors of St. Luke's Hospital.

During his years in business and governance service, including many experiences which involved UMD, McMillan has watched the university grow. “Not only has it expanded its campus, it has strengthened its academic offerings,” he said.

McMillan will focus UMD's energy on ensuring student success and supporting students through their academic journey. He strives to work with university leadership to ensure a smooth transition and continued success for UMD.

Education is the key to unlock the golden door of freedom.